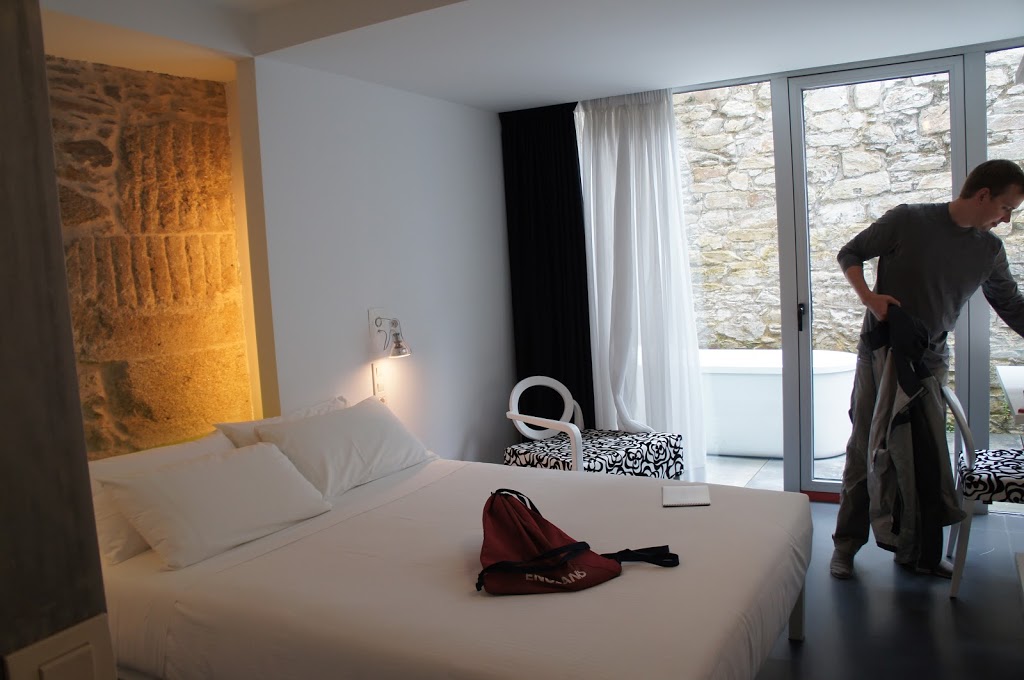 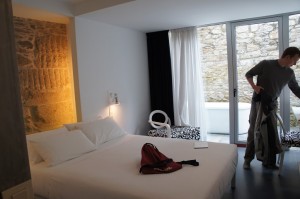 while I booked many of our lodgings before started the Camino, some nights we just walked up to the first albergue, casa rural, or any-star hotel to find a room. for the most part, that worked fine; we found some interesting places to stay, some better than others. as the trip wore on, however, I found I preferred the security of having a bed secured for the night, particularly as we got into the more heavily-traveled final leg of the Camino beyond Sarria.

I found the Hotel Moure by way of a Rick Steves recommendation for the Hotel Altair; at some point early in the Camino, I emailed the other hotel and, as they were full for the night we desired lodging, recommended a sister establishment just a few doors down the road, the Hotel Moure. as with other reservations I set up via email while in Spain, I communicated via email in my passable-on-a-good-day Spanish. usually everything worked out just fine and we got our room (or at least beds) at a predetermined, no-surprises rate. 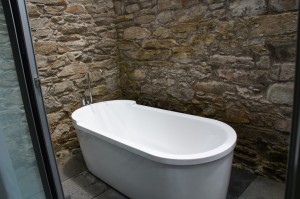 on this instance, we did have a bit of a surprise upon being ushered into the crisp, rather mod, room. my email communication included discussion of whether we cared for a “baño externo;” based on communications with other guest houses, this usually meant a shared bathroom, rather than an ensuite. not so, however, at the Hotel Moure — it actually meant that the tub was outside! the incredibly deep tub sat on a narrow balcony that would have overlooked the interior courtyard, had there not been a privacy wall. it took some convincing and steeling of one’s dignity before we stepped out under the patchy blue sky, and climbed into the fantastically warm water filling the tub. (it wasn’t entirely clear whether any of the rooms above us would be able to see down into the tub; all the windows opened inward, so no one could lean out.) it was a truly singular experience; I might opt for a room higher up in the building with a more scenic view next time, but it was certainly worth it the once.

apart from the outside tub, the rest of the lodging experience was wonderful. they had, by far, my favorite-smelling toiletries (I brought the extras home with us).

one perk of the increased number of peregrinos after Sarria is the ease with which could find food and lodging. we’d had a room booked for Palas de Rei in what turned out to be a modern, comfortable, and highly solicitous hotel (Casa Benilde). our arrival coincided with two political events of varied importance: June 5th marked the date of the Recall election (of which we all know the outcome) and Queen Elizabeth II’s Diamond Jubilee. staying in a modern hotel meant we had an array of cable channels, not just the usual over-the-air basics and caught some of the coverage including her arrival at Buckingham and a flyover by an aerial acrobatic team with World War II Spitfires.

the rest of the day, hike included, didn’t leave much of an impression on me, though I wrote of not feeling physically taxed in the way I’d been on previous days. looking through pictures dredges up hazy memories that pale in comparison to what surfaces when considering the more challenging days. I suppose that four days of hiking fewer than 25 kilometers in favorable temperatures will do that to you. in more than a few ways, the character of the Camino had changed; less sweltering to be sure but also less solitary by quite a long way. 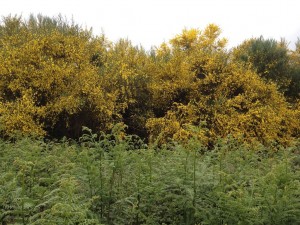 though evidence along the Camino to Palas de Rei suggests settlements dating to the pre-Roman era, little of substance remains. for example, a 7-meter wide ditch leading to a 7-meter wide wall lead up to the current outskirts of one town. outside another (Castromaior) ruins of a Roman camp were discovered, as well as assortment of ceramic vessels. written records of this stretch also refer to it as an “open-air brothel” where prostitutes would approach peregrinos individually to offer their services. for the pious peregrino, the “appropriate” response was to report such wanton women for excommunication, shaming and a punishment of a severed nose. not surprisingly, these women were also often accused of robbing their marks.

neither of my reference books have much to say on the town itself. it serves as an administrative center but only boasts a population of just over 2,000 (still huge compared to many towns we’ve been through, of course); the bus from Lugo to Santiago stops here though little remains of historic significance in the town. legend holds that the Visigothic king Witiza (who reigned from 701-709) built a palace here, from which the town takes its name, though none of that alleged structure remains. rather, the town has more in common with its medieval self, wherein agricultural hamlets surrounded the “big town” as they do today. 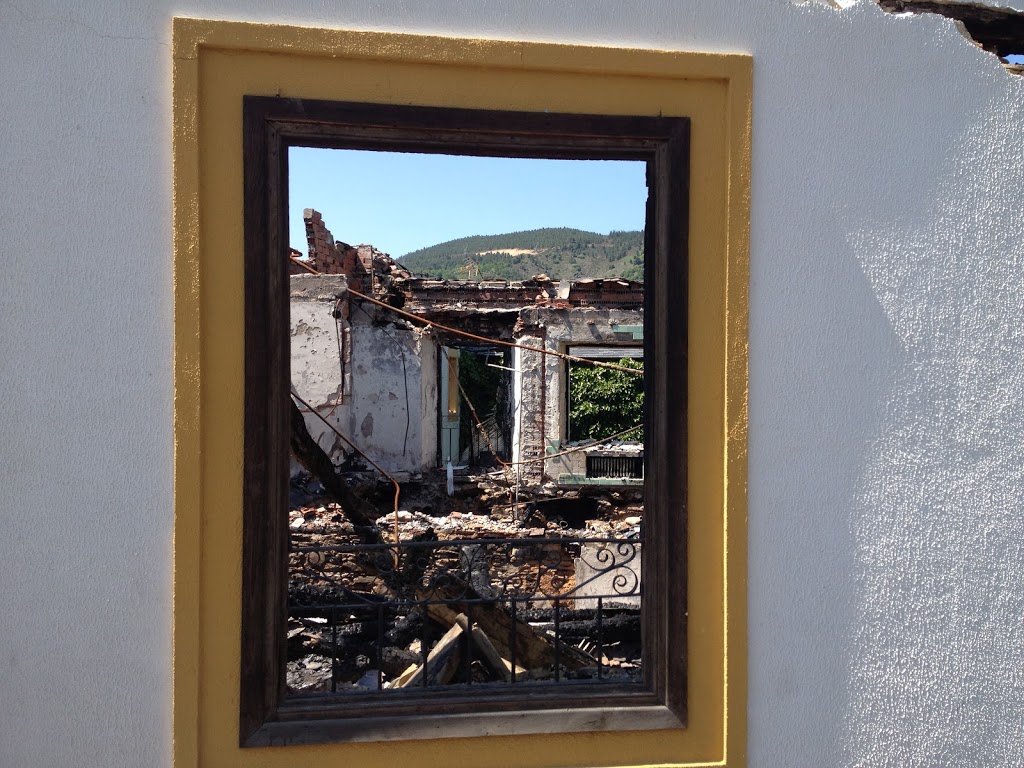 thinking back, it’s kind of impressive how much stuff got crammed into day 26 on our Camino — the Castillo de los Templarios in Ponferrada, TAL episode #465, tasting at Cuatro Pasos, taking a potentially risky shortcut to shave off a couple of kilometers at the end of the day, Brent Spiner on the Nerdist, and the second-craziest shower I experienced while in Spain. I suppose it should come as no surprise then just how relieved we were to stumble into our boutique hotel in Villafranca del Bierzo, Hotel Las Doñas del Portazgo. (if you ever find yourself in Villafranca del Bierzo, I recommend it). 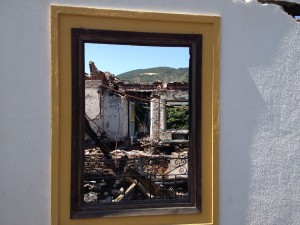 the earliest settlements around Villafranca date from the neolithic age and there’s evidence to suggest it served as an important hub for communication during the Roman period, sitting as it does at the confluence of two rivers (the Burbia and Valcarce) at the western edge of the Bierzo basin and at the foot of the narrow pass that ascends to O Cebriero and Galicia beyond. in the 11th century, the sister of Alfonso VI granted a church to Cluny for establishing a monastery that began cultivating wine. this, along with the explosion of peregrinos during the 12th century, gave rise to a sizable foreign population including many French who aided developing wines. by the middle of the century more than half the town’s inhabitants were foreign. 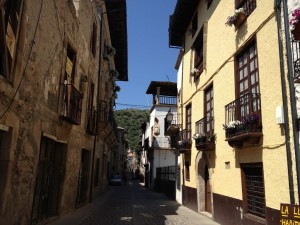 the city flourished for several centuries because of the Camino and in 1486 the Catholic Monarchs established the Marquesado in the town; the second man to hold the title, Pedro Álvarez de Toledo, built a castle though the one that overlooks the valley and town dates from the 1490s and was recently restored to clean up the damage done when the French burned it in 1812. following the second Marques’ death, the city endured its first of many significant hardships that concluded with the burning of the castle by the French. the plague decimated the town’s population in 1589; a flood washed out much along the river in 1715; during the Peninsular War the town served as headquarters for the Galician army and was sacked three times by the English until finally, after the municipal archives were burned, churches robbed, and castle wrecked in 1810 Spain regained control of the area. sort of — the French briefly occupied the town following the expulsion of the English. twelve years later el Bierzo was declared an independent province with Villafranca as its capitol; that lasted two years. 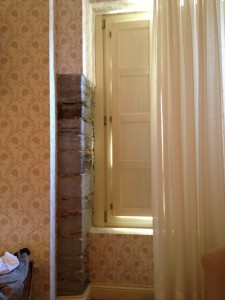 much of the late medieval and Renaissance character remains in Villafranca (as much of the modern industrial revolution passed the city over) including several well-preserved churches. subsequent to its construction in 1186, the Iglesia de Santiago offered ailing peregrinos an alternative to crossing the remaining 187 kilometers of the Camino; if you were too ill or too injured to continue on to Santiago you could pass through the northern entrance — the Puerta del Perdon — and receive a pardon for your sins as you would at the cathedral in Santiago if only you were physically capable of continuing onward. along the narrow streets are facades you might imagine lining prosperous towns of the middle ages — sturdy construction with impressive stonework — though care for these buildings varies widely.

our hotel stood at the end of one such street; it used to serve as the gatehouse for the bridge over the rio Burbia and has been attentively restored and updated; while the entire place exudes comfort, during the update process they left elements of the original building exposed to give a sense of what the place might have felt and looked like a century ago. while the hotel at the end of the road was lovingly restored, there were many other buildings along the way that hadn’t received the same attention. from the refurbished window balcony of one updated home you could look directly into the dilapidated and burned-out husk of another once-magnificent home that hadn’t received the same attentions. Villafranca del Bierzo was clearly thriving, but it didn’t take much to see signs of the common challenges afflicting the rest of Spain. 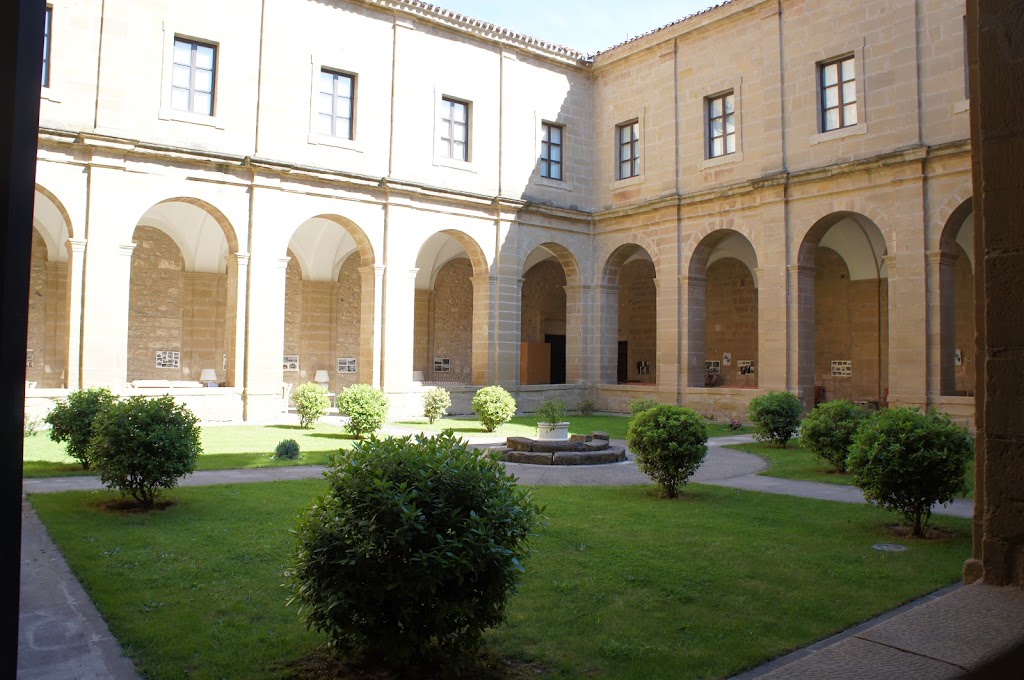 in contrast to the tumbleweed quiet of Cirueña, Santo Domingo de la Calzada was positively bustling. based on the fact it has not one but three Parador hotels it’s something of a destination.

the Parador we stayed in was the newest of the three, converted from the San Francisco monastery; the guest rooms are located in what previously held the hospital de peregrinos and consist of an array of twin and double rooms. as I stood looking out the hatch-like windows in to the courtyard, I had to wonder what previous occupants looked like, how they lived, and what brought them to the room in which I now stood.

a 16th century Franciscan gave his name to the monastery, presumably because he was buried in the monastery after dying here while on the road. in addition to being a comisario general de cruzada (acting on a bull granted by the Pope to help bring Christianity back to Spain and expel Muslims), Bernardo de Fresneda was confessor to King Philip II and bishop of Cueneca. he was traveling to Zaragoza to take up the newly bestowed position of archbishop when he died in Santo Domingo en route.

we had some good food here; while we’d enjoyed a wonderful spread at the Palacio Guendulain in Pamplona, this hotel introduced us to both a wonderful bottle of wine, consumed while waiting for restaurants to re-open for dinner, and the magnificent breakfast spread offered by Paradores. *nomnomnom*