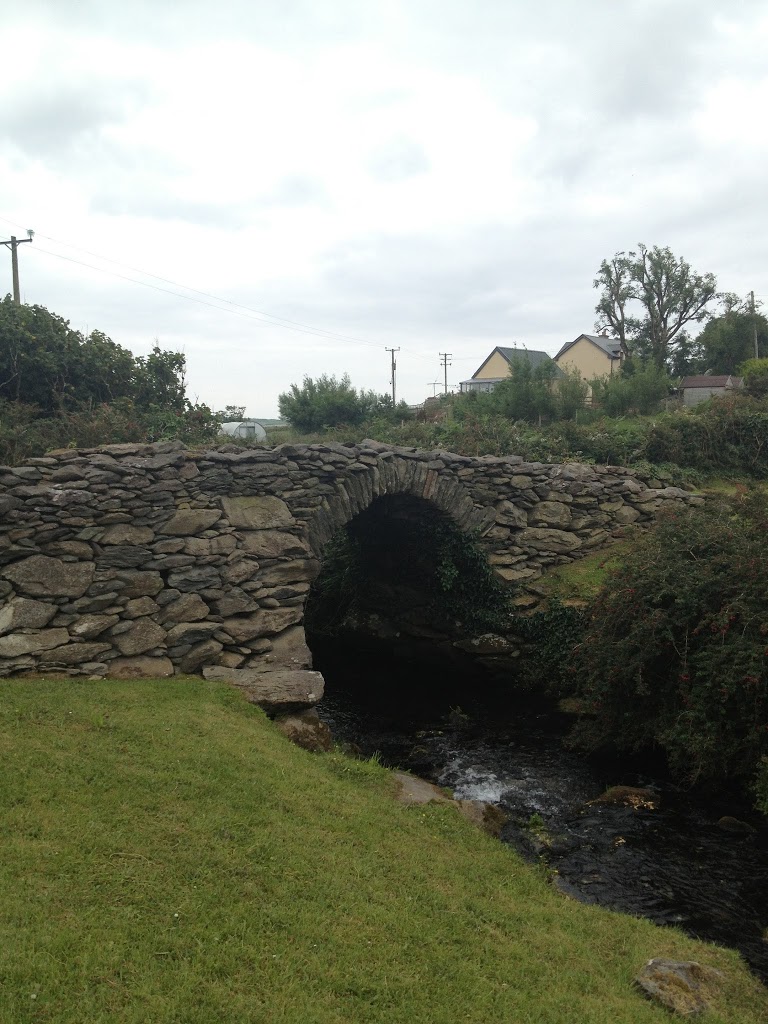 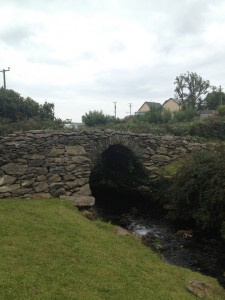 while our guide material made reference to the Garfinny Bridge, it still came as a pleasant surprise. (partly due to the fact that we hadn’t seen a way marker in some time and I’d begun to fear we might have missed a turn.) situated “just” outside of Dingle (if you are in a car … still about an hour if you’re on foot), sources claim it is the oldest surviving stone bridge in all of Ireland. it dates from sometime in the 16th century and, like most bridges of its era, was constructed without mortar — just radial stones and clay to secure everything using a corbelling technique. the apex of the arch stands about 3 meters over the river surface.

the informational plaque indicates that the troops of Lord Deputy Arthur Grey may have crossed this bridge on their way to massacre some 600 Irish, Italian and Spanish rebels at Smerwick Bay. Grey, along with some 6,000 recruited soldiers, had been sent to Ireland in 1580 as Lord Deputy to put down the Second Desmond Rebellion. he was largely successful in stifling the rebellion, but even at the time some of his actions were questioned, such as the massacre at Smerwick. (he also executed a former chief justice for suspicion that the man supported the rebellion.) many say he promised the rebels safety if they surrendered their weapons and position, a promise that he soon broke, giving rise to the term “Grey’s faith.” 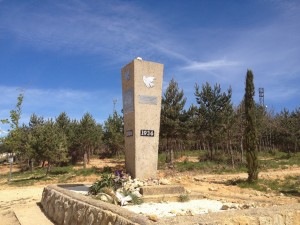 making our way along the Camino through the Montes de Oca we stumbled up on this intriguing monument … the inscription of which indicated something about the Spanish Civil War but for which our guide book said nothing. well, not exactly nothing, it offered this: “A stark monument to the fallen caídos during the Spanish Civil War with picnic tables in the shelter of the trees and a backdrop of wind turbines on the rise behind.” proceeding on to describe how the track descends sharply to a creek bed before ascending again. it was a rather remarkable site and memorial … though the dozen picnickers (and the peregrinos walking along at our pace) did detract from the solemnity of the site.

I imagine it goes without saying that, as one thoroughly intrigued by all manner of historical background for my travels, this complete lack of interest in non-religious historical sites — really a kind of deliberate avoidance — cemented my antipathy towards our guidebook. how can you bring up picnic tables in the same breath as this stark monument to victims of the Spanish Civil War?! a war that I learned almost nothing about in any of the history courses I ever took. 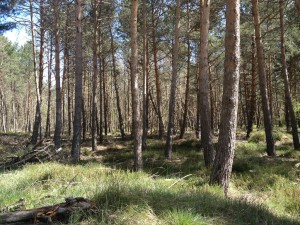 upon getting home, I was gratified to discover that the book of cultural history we opted not to carry with us had slightly more information on this site. it’s a monument to men from Burgos (35km to the west) who were snatched from their homes in the middle of the night and taken for short drives from which they never returned. rebellion against the ruling Republican government broke out in July of 1936 and violence raged throughout the country over the next two months, with some of the worst perpetrated by fascist right wingers in Burgos: “During July and August of 1936, witnesses speak of discovering dozens of bodies every single day along the Arlanzon River, in the Montes de Oca, on the hill by Burgos’s castle, and on the forested grounds of the Cartuja de Miraflores.” (from Gitlitz and Davidson, 2000).

needless to say: I feel compelled to learn more about the Spanish Civil War to better understand how it ties into the history I have studied of the 20th century. also, I’m even more unimpressed by the guidebook we carried with us. was it worth the weight? perhaps, but only just.