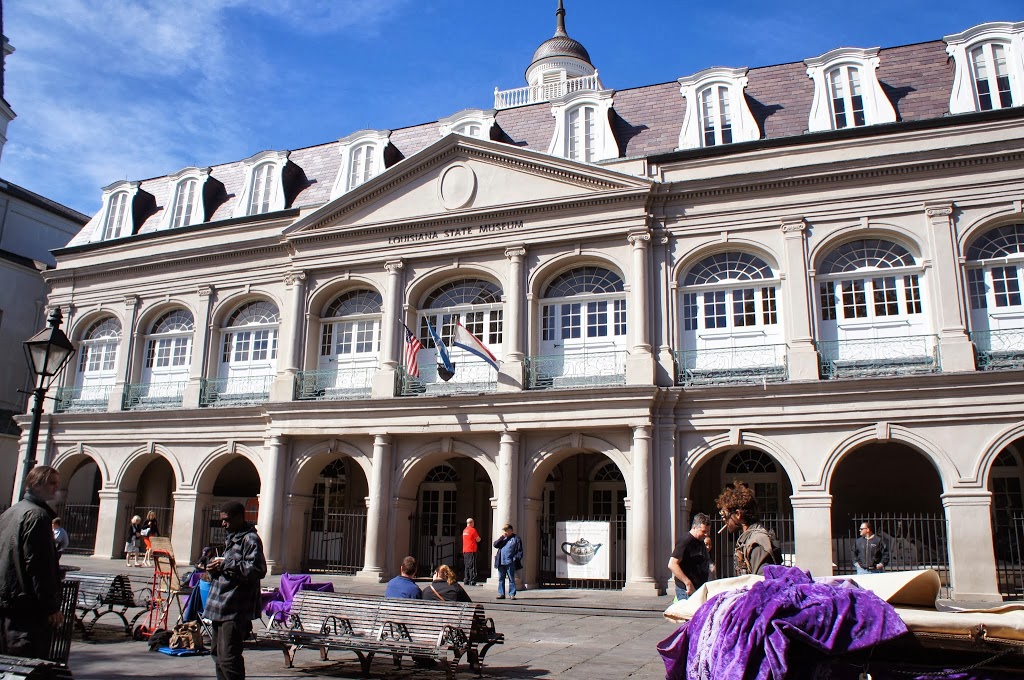 until our trip to New Orleans, all of our Pi Phi Homecoming destinations took us places one of us did or had lived. consequently, I hadn’t much context into which I might fit excitement, anticipation, or plans for must-see sites. (beyond beignets. we knew beignets were #1 on our list of everything.) although generally I anxiously and enthusiastically plan out which historical or otherwise noteworthy places I want to visit, this trip saw me picking a guidebook up from the library on a whim mere days before the trip.

ultimately, that plan worked out pretty well. Gabrielle had visited the city before and knew enough about what to check out to give us a template to structure our weekend on, and the “top sights” provided us with the rest. as a result, I knew little of what to expect when suggesting we check out the Cabildo beyond the (in hindsight) vague blurb in the guidebook. a delightful and detailed tour through the city’s history through Reconstruction in one of its most historic buildings.

the Cabildo and its architectural twin, the Presbytere, buttress the St. Louis Cathedral on the northwestern edge of Jackson Square. fire destroyed the original structure in in the Great New Orleans Fire of 1788 and the present building went up between 1795 and 1799 to serve as the seat of Spanish governance for the territory. that role didn’t last long – the Louisiana Purchase transfer occurred in the Cabildo in 1803 and thereafter served as City Hall until 1853, as well as home to the territorial superior court (1803-1812). it also hosted notable visitors to the city, including the Marquis de Lafayette, who was granted use of the Sala Capitular during his stay. from 1868 to 1910 it served as State Supreme Court, where landmark cases such as Plessy v. Ferguson were adjudicated.

despite housing the Supreme Court, by the late 19th century the building had fallen into significant disrepair and was poised for demolition. artist William Woodward (known for impressionist paintings of the city and Gulf Coast) led a successful campaign to save and preserve the building. in 1908 ownership transferred to the Louisiana State Museum, which opened it to the public with historical exhibits shortly thereafter. it was added to the National Register of Historic Places in 1960 and underwent extensive restoration in the early 1990s following a fire in 1988 that destroyed the cupola and most of the third floor. it came through Katrina with relatively minor damage and served as temporary offices for Louisiana State Police as they patrolled the streets in the aftermath of the disaster. today the Friends of Cabildo run tours of the Vieux Carre, and the site hosts yoga in the second floor gallery that overlooks Jackson Square on Tuesdays, Thursdays, and Saturdays. (it sounded like fun … but we opted for a ride on the St. Charles streetcar, a long walk to Audubon Park, and run around the lake.)