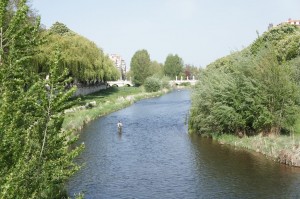 no matter how long it takes to get into Burgos on foot, it is an significant city — both for its connection to El Cid (about which more later) and as the historical capital of Castilla.

earliest settlement of the area overlooking the confluence of Arlanzón River tributaries dates from the Romans. once they left the village plodded along without much excitement the small county of Castilla seceded from León following devastation by Moorish invaders in the early 10th century. thereafter, the heads of León, Aragón, and Navarra fought almost constantly to control the comparatively small buffer state — Burgos proving paramount of the territorial prizes. previous posts have discussed various wars of succession aiming at control over Castilla and/or León; suffice it to say that fortunes for Burgos and Castilla took a tumultuous course.

in addition to its pivotal location on the Camino at the Arlanzón River, trade routes from the Bay of Biscay also passed through here on their way south towards Madrid and Southern Spain. the merchant class that found themselves in Burgos grew into an impressive oligarchy that consolidated considerable political power in the 13th century, using their wealth to bolster the fortunes of various monarchs by providing mounted fighters. by the 14th century, it grew increasingly cosmopolitan, hosting merchants from as far away as London and Bruges. various neighborhoods claimed Castillian, Basque, Aragonese, Frankish, and Moorish inhabitants. the Jewish population, while thriving at one time, was decimated in anti-Semitic riots of the late 14th century. in modern times, Burgos endured battles during the Napoleonic Peninsular and later Carlist wars, as well as serving as the seat of Franco’s Nationalist government. the presence of Franco spurred economic growth of the 20th century as it established textile factories to replace those under Republican control in the east. 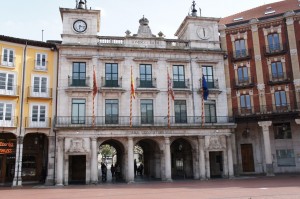 the city is known for it’s remarkably preserved old town, as well as the incredible cathedral at the center of it all. as some of you have seen, we snagged a room with a view of the cathedral for our lodging though, because of nice long soaks in the tub and a splendid nap, we didn’t make it out to investigate the cathedral prior to evening mass … which means we only got to enjoy the exterior. but more on that to come …